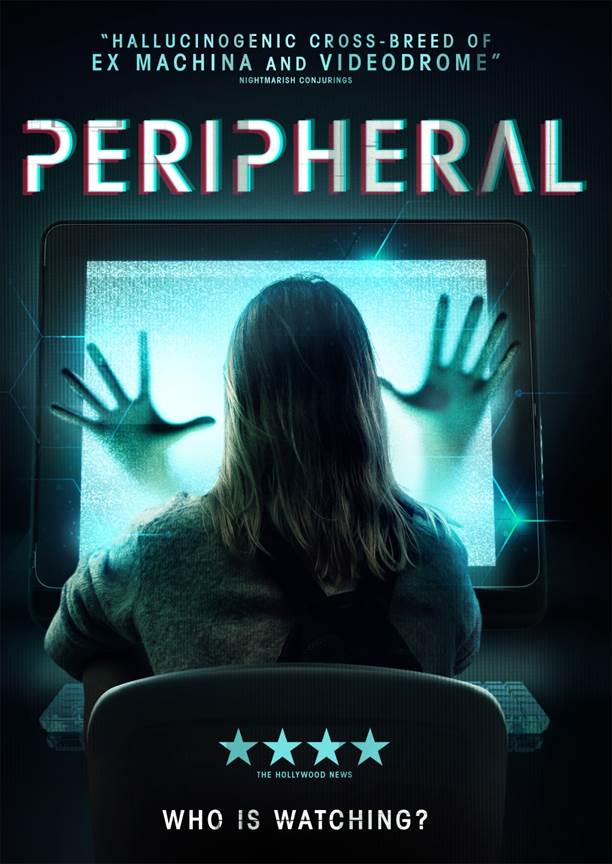 Technology has no boundaries in PERIPHERAL, the latest film by renowned visionary director Paul Hyett, set to be digitally released in the UK courtesy of Blue Finch Films on August 3, 2020. The sinister and unsettling sci-fi horror fantasy will be available on iTunes, Amazon, Google, Sky and Virgin.

This film is beautifully weird. and for me answered the question Who is Bobbi Johnson.(played by Hanna Aterton)  In case you wonder who she is, Bobbi is a super talented author whos first book was a smash hit and who is certainly feeling the pressure to back it up with her second book. But not all is well with this wunderkind writer, she hasn’t written anything and her publisher isnt making things easy by pressuring her into writing, writing, writing, deadlines, deadlines deadlines.  Poor Bobbi also ha a strange stalker who keeps posting VHS tapes (remember those?) through her letter box. (But whos is delivering them?)

When Bobbi makes a deal with her publisher to try a new form f writing technology this is when things to really strange (as if this world wasnt strange enough) and to go into any more detail, would ruin what was a wonderful, but bizarre journey for the near 90 minutes. The film is glorious with a minimal cast and minimal location, this film is a perfect piece of viewing for fans of hit TV show Black Mirror and you could easily be convinced that the film is part of that series.

Hannah Arterton is wonderful as author Bobbi Johnson who starts off stressed but goes through a whole series of emotions and dilemmas as the film unfolds before our eyes and ears.  The other cast members (who I wont list because it may spoil the story details) are on top form as are all cast members in all of Paul Hyett’s movies. I dont think the film does much for authors though as that life looks super stressful and not the easy life that some people may think it is (even though I know its not) Struggling with deadlines, writers block, the pressure of no money coming in and yet a product (in this case, a book) to get out for a certain time. Crikey. What a stressful world Bobbi lives in and thats not including the mysterious deliverer of envelopes containing god knows what! Peripheral is a unique watch, and in this world of franchises, brand names, sequels, prequels, reboots etc. Its a beautiful thing to see a filmmaker like Paul Hyett go from unique tale to unique tale. Many thanks for Paul and the crew for making life as a movie fan and a website writer, that much more enjoyable.