Remember the Roald Dahl film from 1996, the film Matilda?

Do you also remember the Richard Attenborough film Miracle On 34th Street from 1994? Well if you say yes to one or all three of those questions, then youll remember Mara Wilson 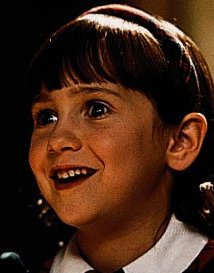 But where did she go? According to the Internet Movie Database. Mara hasnt made a film since 2000s Thomas The Tank Engine movie.

Such a promising actress, where did she go? what is she doing?

Well it seems she focused on her education and graduated from high school in 2005, and  graduated from New York University  Tisch School of the Arts. Hard working girl.

And just to make you feel old, that little girl from Matilda and Mrs Doubtfire will hit her 25th birthday in July this year.