Richard (Gareth Kennerley) – a young man with diabetes – is struggling. As his health deteriorates, so too do his feelings for long-term partner Jane (Rakhee Sharma). He looks for comfort in the calming company of Thomasina (Gillian Dean), a poised and enigmatic blind woman. After Richard loses his own sight, however, his relationships with the two women unravel: things collapse between him and Jane, and his intense but ill-fated connection with the serene Thomasina takes a tragic turn.

One act and three actors, Crystal Clear is a raw and humbling examination of loss and our attempts to cope with it, exploring both human selfishness and our fundamental need for connection. It is both a delicate study of experiences of blindness and a vicious picture of love undone by fear and self-destruction. When Richard turns blind, consumed with impotent rage, he and Thomasina must confront the fundamental question of how their love will survive in a world made for the sighted.

Devised by Phil Young through improvisation with the original cast, the play first premiered at The Old Red Lion in 1982 before transferring to the West End’s Wyndham’s Theatre in 1983. Young went on to direct a television adaptation which aired on BBC One, 21st June 1988. Now, coinciding with The Old Red Lion’s 40th year anniversary, this moving and important piece of theatre returns to the venue where it first debuted.

Young’s script is a fearless attempt to tackle difficult themes around blindness and disability. In reviving Crystal Clear, White Deer Theatre hope to crack open conversations around access and visual impairment, focussing on how our understanding of these issues has changed since the play’s first outing. To this end, visually impaired actor Gillian Dean is cast as Thomasina and access consultant Amelia Cavallo is advising on accessibility, including audio description, touch tours, set, lighting, and sound design throughout the process.

All performances will be accessible for visually impaired audience members, with audio description narrated live by the cast. This approach will make description an integral part of the performance – rather than something hidden behind a pair of headphones – creating a shared experience for sighted and visually impaired audiences. Pre-show touch tours will be available to access ticket holders for every performance. In order to further engage the blind and partially sighted community around the contentious and much-discussed questions that the play raises, writers of all levels of experience will be offered the opportunity to attend the previews and write a rapid response. These response pieces, involving as many visually impaired creatives as possible, will be developed into short plays across ten days and performed in a scratch performance on 3rd Aug. There will also be a post-show panel discussion on 6th August looking at “Access and representation in theatre: successes and remaining challenges”, with additional topics planned for further into the run. 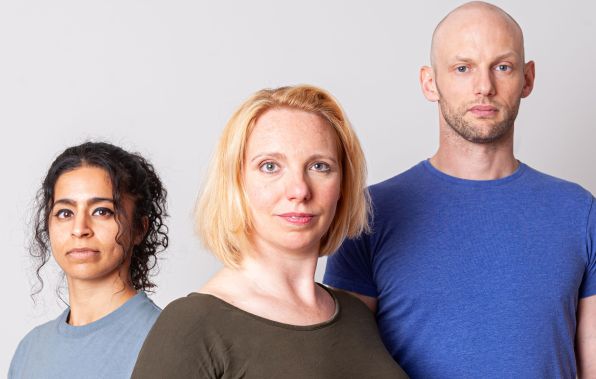 No show on Sunday 28th July, no shows on Mondays

“Undoubtedly the most moving play in London, […] and one of the most intelligent.” The Sunday Times

“Universally applicable bleakness: a picture of love trying to shut out the dark.” The Observer

“A fierce punch to the solar plexus” The New York Times

“So passionate and so involving, it caught me by the throat” The Telegraph

“A harrowing, desperately moving parable about human selfishness in the face of the unbearable cruelty of fate.” Sunday Express

“A play of great passion, wit and above all honesty.” Time Out