Beginning with the October 1969 raid of the Charles Manson ranch in California, and the capture of the infamous cult leader. Manson, written and directed by Brandon Sagle is actually the first film I have seen that gives me backstory into who Charles Manson was and why he did what he did. (I know there are other projects out there, but I just havent seen them yet) 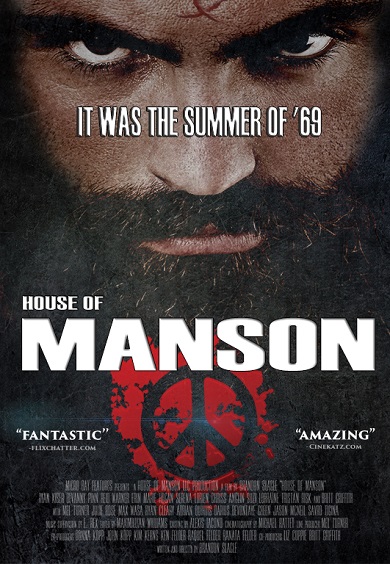 Written and Directed by Brandon Slagle

Titled House of Manson in other countries, but retitled Manson for its UK release. The film is beautifully filmed and has a wonderfully cinematic 1970s feel to it, the sort of feel that I got from Rob Zombies The Devils Rejects and the original Texas Chain Saw Massacre (yes I know that one was actually filmed in the 70s, but you see my point hopefully. The look and feel to the film works wonderfully seeing as this is a period piece taking us back to the beginning so we can learn about the Manson parents, the Manson childhood and of course we the audience just know the dark times to come and Manson shows it all.

Ryan Kiser (Truth or Dare)  is the perfect choice to play Charles Manson and he comes off as scary as they can get without going over the top with it.even causing the audience to feel somewhat sorry for him in a few places, but never letting us forget just how insane and dangerous Charles Manson was and is. There is always the feeling when people think about Charles Manson was just a crazed lunatic, but in reality and shown here in Manson is the truth that people found him very charismatic and were hugely supportive of him and won over by his words and personality. That was a powerful tool but sadly added to the fact he is a crazy as they get. Makes for a very dangerous recipe.

Devanny Pinn (The Black Dahlia Haunting) is perfect in the role of Susan Atkins, one of the cult of Manson who is also captured during the 1969 raid following the Sharon Tate killings. Without even mentioning how good Devanny is in the role, I could go on about just how damn creepy her glare is in Manson.. Devanny and Ryan’s are the best performances in the film, which isnt meant to take anything away from the other cast, its just that Ryan and Devanny are so damn good There are scenes in Manson that will chill you without a single word, but a single glance and head movement is all that is needed.

So is Manson a horror film? Is it a biopic? Is it a drama? Well yes to all really but horror fans, please be assured that when the violence kicks in. It sure as hell kicks in. When we finally get to the Tate killings, it doesn’t hold back, and when thinking this is an actual real life event it just shocks you to the bone. (or at least it did me) The film could be described as a slow burner, but I felt like it was more a pressure cooker, raising its temperature until the lid flies off and hits us in the face.

The moment we see Charles Manson first knock on the door of the Polanski residence, my heart sunk as I have read many books detailing the events Hollywood biographies that mention the fact that people knew of Charles Manson, he was the charismatic hippie kid that hung around the neighborhood. Knowing what was coming next and how far would the film go in showing it, made me 100% nervous. I was right, when the lid flies off this pressure cooker it certainly does fly off and whilst the film 100% doesnt glorify the violence and insanity of that night, it doesnt hold back either and caused me to look away on a few occassions. Brutal, but realistic with it. Which I would hope is what the filmmakers were going for. What I also loved about the film and its not a spoiler, I promise. Is that over the end credits. We are given text updates on what happened to a lot of the main ‘names’ in this tragedy. Not just a single line but quite a few lines which told me things I didnt know.

All in all Manson (or House of Manson if you are outside the UK) is a tough watch and I still cant work ouit if Id class it as more biopic/drama than horror. It certainly has a lot of horror in it and will make you cringe beyond belief if you have one ounce of humanity in you. Highly recommended to everyone other than anyone who knows anyone involved in the real life events.