Having already raised £30,000 from private equity, sponsorship and in-kind investment, the company aims to prove the spirit of micro budget British feature film is alive and kicking.

Setting out to raise up to a further £15,000 on INDIEGOGO to finish production and take the film to festivals and beyond Producer/ Director DB Morgan, an award winning filmmaker from Colchester, Essex, UK explains:

“The positive snowball effect for my little debut feature has been nothing more than staggering. From attaching amazing actors like Frank Jakeman (Game of Thrones) and Leona Clarke (An Inspector Calls), to the legendary Gregg Masuak (Canadian music video Director famed for his work with Kylie, Take That, Level 42, Mike and the Mechanics, Celine Dion, Lionel Richie and many more). We aim to produce the most claustrophobic movie ever made. But more than that, and possibly the main reason we’ve managed to attract such amazing people to the project, is the fact that Faith has real soul. It tells a heart-breaking story that so many people can relate to. Faith, at its heart, tells the story of a family torn apart by vascular dementia and their inability to deal with the raw, and complex, emotions that stem from it.’

It’s heart-breaking, it’s real and DB Morgan draws from his personal experience of witnessing his own father’s ongoing plight with dementia.

DB Morgan has developed a story full of relevance that mirrors the hopelessness we all feel towards the modern world and destruction of family values and morality. Much in the same way that Jordan Peele’s ‘Get Out’, or Jeremy Saulnier’s ‘Green Room’ holds a mirror up to the dark unspoken truths of the modern world.

‘Faith’ essentially becomes, at core level, a social commentary on the breakdown of family and the disillusionment we often feel with under- standing the point of our existence in the modern world. Specifically, Faith asks us to contemplate our coping methods, our chosen poison, and reminds us that faith in a higher power – be that religion or spirituality – is what’s needed to get by.

“Good films begin with great stories. A great premise, realistic, well developed characters and a rollercoaster ride of emotion where you feel wrung dry at the end! These are the subtleties that work on conscious and subconscious levels to create thrilling movie experiences.” DB Morgan

Faith Movie UK ltd was established in 2019 and is owned by DB Morgan. Following several short film successes – including winning an MTV short film competition in 2010 – Dominic (DB) Morgan is playing catch up. Following the MTV win, his daughter, Jodi was diagnosed with severe aplastic anaemia and she tragically passed away in 2010, aged 12. He stopped working on films, and began fundraising for www.sickchildrenstrust.org in 2010, where his family raised several thousand pounds for this amazing charity and also donated tablet PC’s to Addenbrooks hospital in Cambridge, UK. 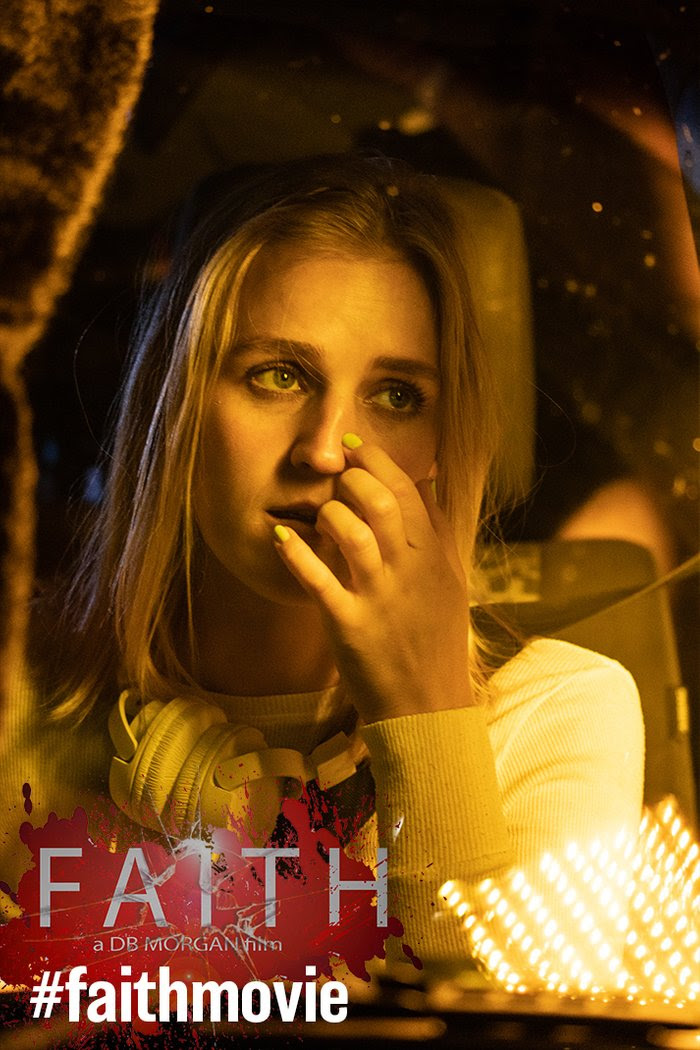 Jumping back into his lifelong passion for film in 2017, DB Morgan, and Faith Movie UK, aim to produce inspirational, hard hitting and socially relevant, works of theatrical fiction. The aim with his slate of five feature films (to date) is to produce works that question what it is to be human. To challenge pre-conceived ideas about identity, morality, gender and sexuality. Films with heart and the ability to raise questions about the human condition.

A percentage of proceeds from all his films and creative works will continue to support www.sickchildrenstrust.org together with adding in support for www.dementiaUK.org in respect of his father’s ongoing battle with vascular dementia. A percentage of proceeds from the UK red carpet premiere (Winter 2020 @Firstsite, Colchester, Essex) will also be shared between these two great charities.

Mr Morgan has created a plethora of fantastic, money-can’t-buy perks for the Indiegogo campaign – including signed props from the film and exclusive VIP UK premeire screening, champagne and canapé reception with cast and crew. Backers can even have a minor role in the movie for their participation.

Check out https://igg.me/at/FaithMovieUK to find out more.