With Season 1 of the online version of Spending Time With..being so popular, not only with those who took the time to answer the set questions that I fired over to them, but also with people who read the article and of course with myself for not only being able to read the answers typed out by these creative souls, but also being able to share these articles across the various frompage2screen channels. I always knew that I would bring out a ‘season 2’ of Spending Time With… So its with great pleasure that  Spending Time With…Season 2 continues. 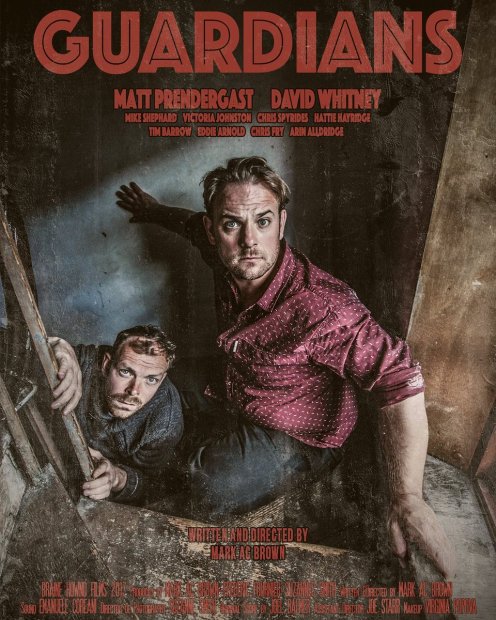 Many thanks to Mark for taking the time to answer these questions, I learned a lot from reading the answers and pretty sure youll enjoy reading them as much as I did.

When people ask you ‘so, what do you do?’ How do you introduce yourself?

I always say writer. Then they ask. ‘Ooh, what kinds? Books?’ and I say ‘No, film. Scripts.’ And they go ‘Wow, that’s great. Anything I would have seen?’ and I go ‘No.’ What’s the first thing you do when you get on ‘set’ -Coffee and a Pain Au Chocolat. Then a chat with my 1st AD about what the plan for the day is.

-Coffee and a Pain Au Chocolat. Every morning. Other than that I haven’t been doing it long enough to develop a tradition.

Bryan Cranston’s autobiography. Bought for me by one of my lead actors David Whitney. Great book. Funny and truthful.

-I’m currently not embroiled in any shows. I’m watching the new X-Files, which as the previous season also was, is by turns great and bafflingly pointless. I’ve watched a remarkable amount of bad TV of late. McMafia (boring), Requiem (unsatisfying), Trauma (as if a 6 part drama had been edited down to 3 episodes with all the bits of character and plot taken out.) Inside No.9 has been the best thing on TV for a while.

I recently met the amazing Brenda Blethyn at a festival but she was so lovely and disarming I didn’t get starstruck. So I’m going to go with Gillian Anderson who once interrupted a Mothers Day lunch we were having to tell me how cute my daughter was. I didn’t realise it was her at first as she was leaning over my shoulder but when I turned and realised who it as I became quite the stuttering git.

The Wizard of Oz. Apparently I watched it every day for three years. Which explains why I know all the words to ‘Ding Dong the Witch is Dead’ and I have a deep seated fear of witches and flying monkeys.

I’m one of those people that if I’m not enjoying it I can’t do it so I don’t find much of the process that hard. I’m assuming this will change when I’m not working with my friends. I found the post-production of Guardians difficult as I am not a technical person. So dealing with the sound, music and grade was like learning a foreign language. My producer Fred is usually the one who deals with the big words and colourful squiggly lines on computers while I just stood at the back going ‘ yep, that sounds/looks good’. But he was not available for a while so I had to do it. Fortunately said composer, sound designer and colourist were happy to explain things to me in idiot terms. And then Fred came back.

A wise man learns from other people mistakes. I am not a proponent of the advice ‘You have to make your own mistakes’. Let someone else do it first and then don’t do what they did. When making Guardians I found this particularly valuable. From beginning to end I had in my mind ‘this is what went wrong on this project so I won’t do that.’ Figuring out what to do differently was the hard part. And I definitely did make my own mistakes. But the advice still stands.

More funding for grassroots talent. And I don’t mean just the 15-18 year olds. People get into this industry at all stages of life. In comedy to be a ‘New Act’ you need to have performed less than 100 gigs or have only been going for three years or have only played open mic nights. It changes depending on the club or competition. The point is it has nothing to do with age but experience. There’s an ocean of talent out there that, due to the attitudes of whoever, don’t know they can make films until they are well past the point of a lot of funding criteria. Also people should stop asking ‘How much did it cost?’ and be asking ‘Is it good?’. There’s still a huge snobbery towards lo-budget film. Quality should be the only criteria.

As Guardians is my first feature then yes. I kind of need the love. Not so much personally. Working in theatre and comedy gives you a reasonably thick skin. But a film this size needs word of mouth and reviews to survive.

Gary Oldman. My favourite actor since 1992. Can do anything. And Michael Keaton for the Americans.

I’m in favour of and against both. I’ll go for day shoots as I’ll take an early morning if I can have a well deserved cold beer at the end of it. Night shoots only end in sleep.

The Backyard Comedy Club for my short film Corinthian. We had total control of the whole place for a long time for free. It was one of those venues that was perfect for what we were doing. It’s funny how little difference there is between a comedy club and a bare knuckle boxing venue.

Planes, Trains and Automobiles. John Hughes finest. John Candy’s most loveable yet obnoxious performance. Best expletive speech ever from Steve Martin. Too many moments to count that make me laugh just by thinking of them.

What film scares you? –

Jaws. I have never been in the water past my waist since the 80’s.

What film do you love that you feel most people might not be aware of? –

Henry Fool by Hal Hartley. That film changed he way I thought about film and writing. The central performance from Thomas Jay Ryan is one of the best ever. I became a different filmmaker after that film. In your creative roles?

What is the longest day that you’ve ever had? –

That would have to be in theatre. I used to run a theatre company called Joinedupwriters (which is where I met Matt and David my two leads in Guardians). We would do these festivals that involved, on any one day, a monologue, a duologue and a one act play. So Tech day, which was usually the same day as the first performance, meant we would be in the theatre at 9am to go through the sound and lighting for each play. That would take around 6-8 hours then we’d have to reset for the first play and then we’d do the performance. And then drinks. So the day would be 9am till about 2am depending on how generous the Old Red Lion pub theatre was feeling. In those days they were pretty generous.

Do you have any ‘props or keepsakes from your films? –

I live in the house where we shot Guardians so pretty much the whole place is a prop. What is your proudest achievement? – Getting Guardians done and out in to the world. I’ve only ever wanted to be a filmmaker and now I have one that I love and people seem to appreciate and it’s been on screens bigger than a phone.

Have you ever gotten someone’s autograph?

Which is the most memorable for you? -I am not an autograph guy. But a time when I feel like I should have got one is when I was in Cannes with Mike Shephard a few years ago. Mike had already embarrassed me by squealing like a piglet when we saw Mark Rylance getting out of a car. I dragged Mike away and onto the Croisette and we began wandering towards the nearest happy hour when we passed the Nespresso Tent on the beach. I said to Mike ‘ I bet you George Clooney never drinks in there.’ Because, despite being the face of said coffee, why would he? Then Mike pointed to a man sat on the beach outside the Nespresso tent not 3 feet away from me and said ‘Isn’t that George Clooney?’ I looked. It was. George smiled. I walked away very quickly. As I walked away I thought ‘If I was going to ask for an autograph from a superstar that was the time as I couldn’t have looked more of a cock.’