I was swapping tweets with some of the crew and a comment that cropped up a couple of times was ‘Its not a film for everyone’. I could see where that comment came from and well, most films arent for everyone but The Stagg Do is a film for most people. A mental comedy film that is about friendship and life. Four friends go on a stag do (the male party before a wedding) in the hope of having one fantastic blow out before Staggy (played by Andrew Stagg) marries his fiance, Charlotte (played by Therase Neve). Booze, Women and insanity is all lined up by the guys but things turn a little trickier when Charlotte makes sure that her Father, ‘The Judge’ goes along to keep an eye on everyone. But that doesnt mean the night will be uneventful.

The Stagg Do is a lot of fun to watch with snappy realistic sarcastic dialogue and anyone who has long term friends who love to drink and say what they wish should be able to relate to some of the craziness. I hate labeling films but could this be the ‘Geordie’ version of The Hangover. It could be…  Shot on a low budget but it doesnt really show, I bet the shoot was a lot of fun. The guys behind the film have done a fantastic job on The Stagg Do and I can see this film becoming one of those films carried by word of mouth into the type of film that is quoted for years Like the way Four Lions is quoted left right and centre. There are so many one liners in here that already Ive seen people on social media using the quote ‘fanny f*cking-tastic’ when it comes to talking about not only just this film but things in general. Even the DVD menu has ‘Play Fillum’ and ‘Fanny-tastic Features which made me chuckle before the movie had even begun. 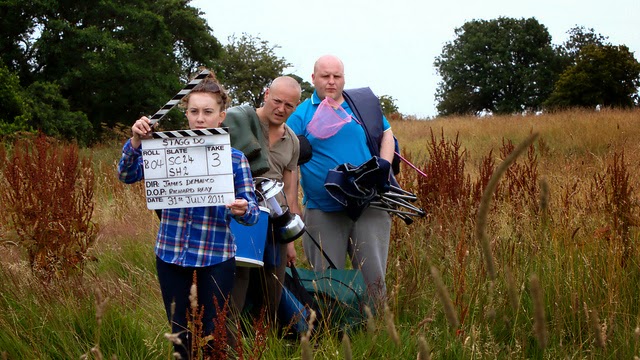 The cast also do a wonderful job and its always a pleasure to see Craig Conway (The Descent,The Myth Of Hopelessness) doing comedy. Im a fan of his dramatic work but also a huge fan of his comedic roles (How To Stop Being A Loser)  Martin Paterson who co wrote the film does a great job in the role of Pob, the best man, hated by Charlotte but with a heart of gold. This is Martins screen debut but hopefully not his last appearance. I could go on about the cast, but check out the film for yourself and see which characters are your favourites.

The DVD and other merchandise is available at their site. Click HERE to view.