As I sit down, prepping my 18th episode of The British Movie Show (Im about to begin recording in ten minutes or so), I decided to share with you some video interviews that have come my way. They are by the principle cast of the wonderful British film White Collar Hooligan 2:England Away, the second part of Rise and Fall Of A White Collar Hooligan.  The interviews are wonderful, the guys  (and girls) in the film are excellent but thats because they are excellent people in real life too and that comes across in the clips that I am sharing with you here. 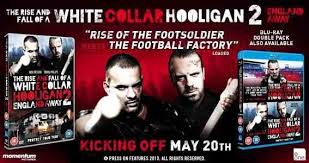 Be warned though. There are some plot details released within these clips. So if your DVD or Blu Ray of White Collar Hooligan 2:England Away is sitting on your desk or in your player and youll be watching the film today. Hold off on watching these clips until youve finished the film.  They wont ruin the film by any means, but for ME, some of the beauty of the film was not being really sure where the characters would go and what events would unfold.

Dont get me wrong, there arent any spoilers of ‘He is Keyser Soze’ but nevertheless. Be warned.

Other than that. Enjoy these clips. Share this posting if you like (and can) but make sure you watch White Collar Hooligan 2:England Away. Great film. Great cast (and great music by Supar Novar @supranovar)

Then its onto the title star himself. Mr Nick Nevern @nicknevern on Twitter

Then rounding off this motley crew. Is the man himself. Mr Simon Phillips @siphillips1980 on Twitter