Ex-Marine (now Paramedic) Jake Carter ( played by WWE superstar Michael “The Miz” Mizanin ) finds himself in a whole heap of trouble when he and his partner respond to a distress call in a supposed to be deserted parking lot. What starts off as a potentially routine medical call, soon turns into not only a deadly cat and mouse game between himself and a biker gang it also will take all the skills Jake learned in the marines to get himself out of there alive and in one piece. Welcome to The Marine 5: Battleground, brought to you by Director James Nunn, Writers  Scott Wiper,Edward McHenry.& Rory McHenry and WWE Studios 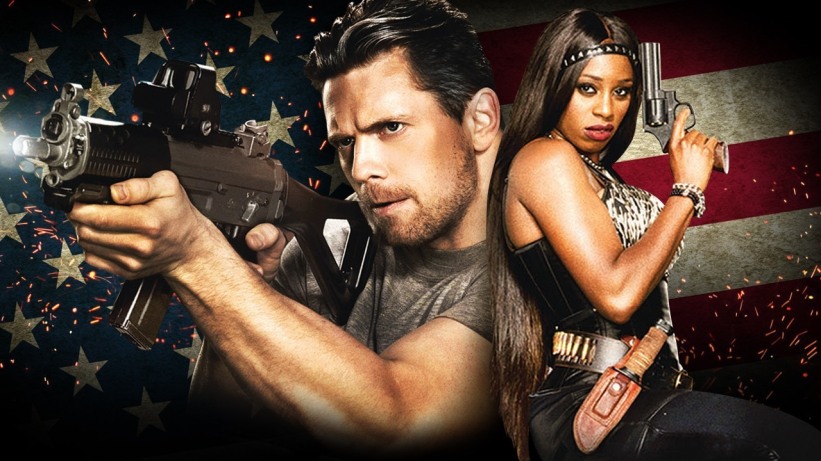 Dont be put off by the ‘5’ in the title. Whilst I am aware of The Marine series of films, this fifth installment is actually the first of the franchise films that I have seen, and whilst Jake Carter (played by Michael “The Miz” Mizanin ) also appears in parts 3 and 4, there is no need to have seen those films in order to get full enjoyment out of this crazy action packed film that could so easily be described as Sons of Anarchy meets The Warriors, with a dashing or five of the Die Hard films, all stirred up and given the slick work over that James Nunn brings to his films of late. I was a huge fan of his previous film Eliminators (starring Scott Adkins) and hoped that this film would be just as much enjoyment as that film, and I wasn’t let down. The film is non stop entertainment from start to end.

Even with the fact that most of the film is set in an underground car park not, this doesn’t lessen the films enjoyment with some OTT villains, more bullets than a Rambo film (well maybe more more bullets than the 4th Rambo film, but thats a hard one to beat) , some great motorbike action, and some great fight sequences that you will expect from a WWE film. Also on the ‘it needs to happen if its a WWE studios film’ are some great supporting roles for other wrestling talents, such as Trinity Fatu, Maryse Mizanin,Heath Miller, Joe Hennig, and Taylor Rottunda all chewing the scenery with one thing in mind. Giving the audience the best show possible, and they do that wonderfully.

I’ve seen some so called reviews that comment about some of aspects of The Marine 5:Battleground being far fetched but that’s what I want from a film like this. I want fun, I want snappy dialogue that wouldn’t be a stranger in an 80s Schwarzenegger film, I want kick ass women, bullet casings to fly all over the place,great fight scenes,  and in the end I want to to be entertained. and Mr James Nunn has done it again with The Marine 5:Battleground. Now can someone please greenlight a new installment of The Purge franchise or a new Fast and Furious entry and let James Nunn work his magic.