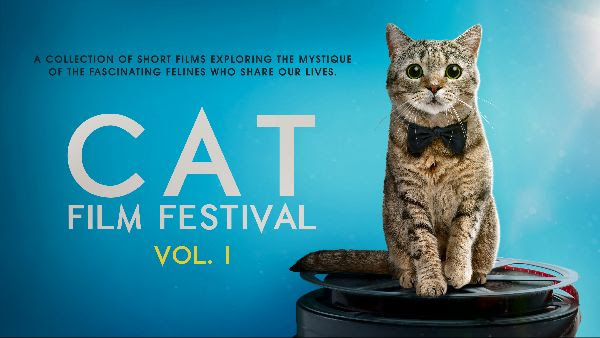 Animal lovers rejoice as the Cat Film Festival and Dog Film Festival come to your lounge room this September!
Presented by Tracie Hotchner & the Radio Pet Lady Network, this collection of short films –  which premiered  theatrically – is now available on Tubi and Amazon from Dark Star Pictures.

The annual Cat Film Festival is a philanthropic celebration through film of our relationship with the mysterious felines who share our world.

The Cat Film Festival is an exploration through film of the fascinating felines who share our lives, creating a shared audience experience that inspires, educates and entertains.  Cats have their own unique and indescribable bond with people – even when living independently as community cats. For far too long, felines have been the “invisible” part of the human-animal bond and it’s time to shine the spotlight on these magnificent creatures and the humans devoted to them. A portion of every ticket at every destination goes to a local animal welfare non-profit, bringing community awareness and support for the needs of local kitties.

Volume 1 of Cat Film Festival, now available on Tubi and Amazon, includes films that range from a documentary about a dedicated housecall cat groomer, a funny skit about old ladies who gamble over supposed staged catfights, a documentary about cats on a California jetty and controversies about trap-neuter-return programs, and a touching documentary about kittens from a shelter being socialized for adoption by old people with Alzheimer’s, whose lives are enhanced by the kitties.

Volume 1 of The Dog Film Festival, also available on Tubi and Amazon, takes you on three different animated canine adventures, into a prison where dogs learn with female inmates, to Australia where a quirky couple adopt dogs with challenges, to the different ways the British love their dogs and a heart-tugging relationship between a little boy with physical challenges and a great big dog who transforms his life.