Fresh out on the streets from a 10-year prison sentence, a killer is focused on seeking vengeance against his beloved sister’s murderers. Aided by those he believes he can trust, they go on a 24 hour killing spree to settle all scores as a discredited detective, whose superior questions her every move must deal with her past before she can uncover the shocking truth behind their motives.

Kris Johnson (Undercover Hooligan) takes the main role in this film as the ex con intent on revenge, and once again shines, The cast of 24 Hours in London also features some great names from the UK film world, such as Marc Bannerman ( No Reasons, A Landscape of Lies) who plays Angelo and is one of my favourite performances in this film, Danny Midwinter (Rise Of The Krays, Interview With A Hitman), Ewan MacIntosh (The Office, K Shop), and Fiona Skinner who takes the role of DI Simmons, the discredited detective) and who I am familiar with from her roles in hit shows Taboo (with Tom Hardy), and the TV movie Our Girl. Fiona once again takes the role and runs with it, giving a great performance in this under pressure character performance.
I’ve been a fan of the team of Paul and Diane Knight’s for a few years now, having followed their film journey since the 2011 film A Landscape Of Lies, and have watched them from afar as they have created a range of films that include ’10’, the short film Birthday Boy and Dead Wood among their growing resume.and here they have crafted a stylish UK based indie thriller that pulls off a few master strokes, including having a main character (wonderfully played by Kris Johnson) who utters no words at all in the near 90 minute film, Kris plays the vengeful role with body language and whilst a no talking character in a film or show can sometimes come off as gimmicky, it works within this world of 24 Hours In London and Kris Johnson adds another fine role to his ever growing filmography. There are also things that not everyone may notice, including the use of a music composer who crafts the music for the law enforcement side of the film (composer Lance Warlock) , and another composer for the criminal side of the film (Paul Tucker). Very clever!  There are a few rap style tracks in the film, which will be adored by some, but for me took me away a little from the enjoyment, but thats mainly because for me, im just not a huge fan of rap songs, but hey! 24 Hours In London was made for far more people than little ole me!  Lets get back to the clever! As well as the multi composers, You’ll also notice that for each side of the crime/law coin, there are also different camera styles which also helps keep the two worlds giving their own voice (although with Kris Johnson’s unnamed character, there of course is no voice)

Its always fun to see filmmakers grow their skills and expand the acting talent they work with along the way (but its also great to see them work with many of the same acting talent, taking them into new styles of roles and stories. Behind the camera, the breakneck speed and logistical process is wonderfully insane with this feature film being filmed in only 8 days with a large cast of characters and locations.. Heres hoping that someone captured the making of this film as I bet that is such a wonderful viewing that would teach us newbie filmmakers a hell of a lot. With 24 Hours In London out in the world, it will be another interesting journey ahead to see what the next Written and Directed (and Produced) film is by Paul and Diane. Wishing them all the best!

24 Hours In London is available from now on DVD and Digital platforms. 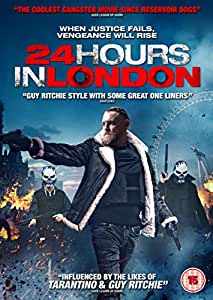