Above, youll see the cover of the DVD for the latest directorial project by one of my favourite filmmakers Paul Hyett, a man whos talent has no limits and who has helped create some of the best make up and special effects in films over the past few years. In films such as Dog Soldiers, The Descent, The Children, First Born, Tower Block and many, many more. Paul Hyetts career in the film and television make up and fx departments served him so well and made so many films that much better than they might have been had he not been around to help make the blood flow better, and the creatures scare us more. So when Paul took a seat in the directors chair for 2012’s dark thriller The Seasoning House,, this was a brilliant move, and that film to this day is on a short list of highly recommended films that everyone should see. Brutal but realistic, powerful cinema but not with popcorn. Paul Hyett has scored a 10/10 in my book (and many other peoples too). He followed his directorial work with 2015s werewolves on a train thriller Howl which thankfully had far more laughs than The Seasoning House, but was no less a 10/10 piece of film. Then came Heretiks, and the news that Paul Hyett would be working with my favourite actor of all time. Michael Ironside. I was super happy but also super envious that Michael was in the country but I couldnt get there to say hey ‘thanks for Scanners, Ham Tyler and every other role youve done’ but  thats just the envious geek part of me. Now in between the release of Heretiks (now out on home release) came Peripheral, a tale of Bobbi (played by Hanna Arterton) a young literary sensation facing her difficult second novel who also found herseld dealing with a crazed stalker,an ex-boyfriend, and a new smart AI editing software determined to write her book for her. A very strange film but a super unique one at that. Paul Hyett was 3 for 3 in my book.

Then, finally this month, I got the chance to sit down and watch Heretiks (also known as The Convent in some places). So how did Paul do? Has be struck gold again with me and made it 4 out of 4 directorial films. Well quite simply yes.

Beginning in 1619,England,but then leaping forward 40 years, we meet Persephone,(played by Hanna Aterton)  who is falsely accused, arrested and very quickly sentenced to death for witchcraft, but just in the nick of time she is ‘saved’ by the mysterious Reverend Mother and taken to ‘The Convent’ where are introduced to the rest of the characters we will spend the next hour or so with. I will get my grumble out of the way and its not a grumble at Paul Hyett or any of the crew on the film. Its a grumble at the poster designer. Look at the cast list at the top. First name? Michael Ironside. Hes the main star right? Nope, he might well be the biggest name, but sadly Michael appearance (as great as it is) is only just less than 3 minutes of screen time.  However in the films credits he is credited as ‘and Michael Ironside’ which makes far more sense. So there you go. If you expect a full length film featuring the great man himself, then you may be disappointed but thats the single only grump I had with the poster art (and not the film) Lets bring on the good stuff now.

This film is beautiful, from its set design to its costume design, the soundtrack, the performances by the cast (its great that Rosie Day makes an appearance in the film too, i love that Rosie appears in most of Pauls films, I hope that continues) and whilst I will admit that films about witchcraft arent normally my thing and rarely freak me out, there is so much in this film that not only helped me feel immersed in this world for the duration of the film, but also made me jump a few times that I actually was totally fine with watching a film that featured witchcraft as for me i preferred to think of this film as a damn creepy drama that just happened to have horrific events happen in it.  I was sucked in by the atmospheric feel to the film and the locations, and of course the performances by everyone involved, not just those in front of the camera but also the crew behind the camera too.  Great mentions have to go to Hanna for her role as Persephone, who straight away, we are on her ‘side; and genuinely care and worry about her and hope that she will be okay in this scary creepy world, Also Rosie Day adds yet another great role to her resume, as Sister Emeline another inhabitant of this less than 5 star convent. Rosie is such a talent and has proven in her role in the The Seasoning House that dialogue isnt always needed to create a great performance, Rosie again handles silent scenes in Heretiks with brilliance once again.   It was also great to see Petra Bryant in the film as Agnes. Ive been a fan of Petra for a few years now. 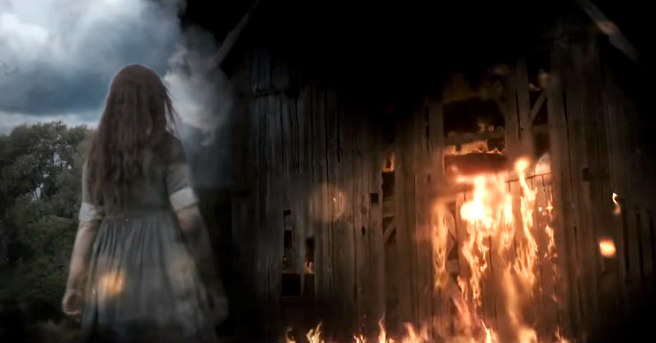 So the pressure is on again for Paul Hyett as he now has 4/4 great films and one of the things that makes him such a wonderful filmmaker in my book is that he doesnt bottle himself into one type of film. With the 4 feature films that he has directed, each one has been very different and they have all been…..fantastic to watch and talk about.