A brand new restoration of Ealing Studios classic THE PROUD VALLEY comes to Blu-Ray, DVD and EST on 27 March as part of the Vintage Classics collection courtesy of STUDIOCANAL. 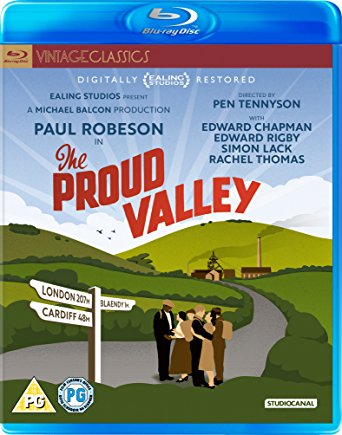 ‘BLACK STAR’ season celebrating the range, versatility and power of black actors. Set in the Welsh mining valleys this popular social drama is an authentic portrayal of working-class life and society struggles which rung true with Robeson, a political activist in his own right, and is the second of just three films ever made by the young director Penrose Tennyson (There Ain’t No Justice, Convoy).

THE PROUD VALLEY was Robeson’s final British feature and the one film that in his own words, he was “proud of having played in”. David Goliath (Robeson), a charismatic African-American stoker, washes up in a small Welsh village where he finds work alongside the miners down the pit. A competent singer, Goliath’s roaring voice soon draws the attention of the local choir master Dick Parry (Simon Lack: The Silver Darlings, Enemy at the Door) and his son Emlyn (Edward Chapman: Convoy, It Always Rains on Sunday), who have ambitions of winning the national choir contest. Following a deadly explosion, the pits are closed, leaving the villagers out of work and struggling to make ends meet. Wanting to help the community that welcomed him so generously, David rouses a group of activists to march to London in the hope of reopening the mine in time to serve the nation at the outbreak of war.