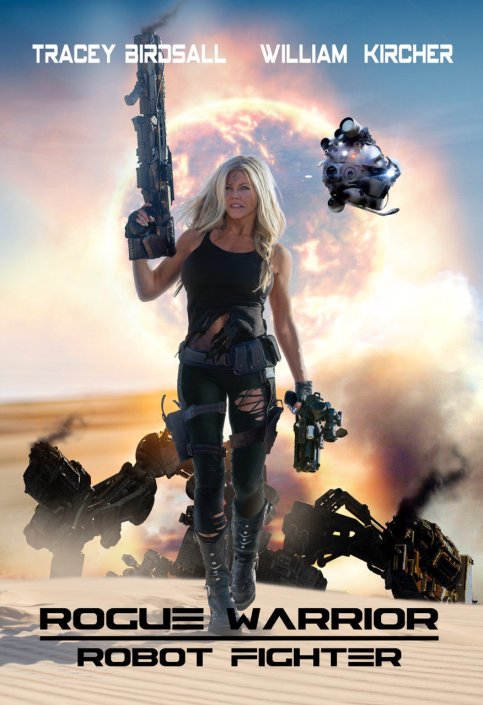 Written and Directed by Neil Johnson

When entering the world of Rogue Warrior:Robot Fighter, I knew that I would be given a visual treat. In the past couple of years I had seen Starship Rising and Starship Apocalypse which were written and directed by Neil Johnson (who also wrote and directed Rogue Warrior:Robot Fighter) so the visual side of things I knew would be handled perfectly. 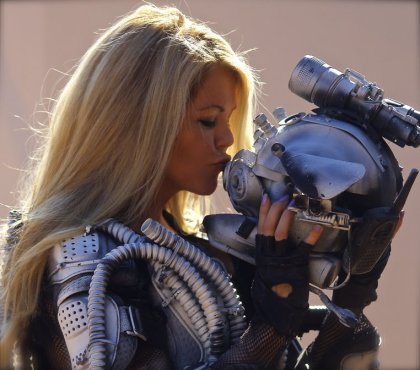 The storyline of Rogue Warrior I knew a little about. I knew about some of the cast members,I knew that Tracey Birdsall (Who’s Jenna), Marilyn Ghigliotti (Clerks) Stephen Manley (Star Trek III), Daz Crawford (Agents of Shield) and William Kircher (The Hobbit Trilogy) were in the cast list. I knew a few other names but I dont wnat to turn this piece of writing into an IMDB cast list. You can find out more by heading over to the IMDB Page  I had also  seen a few still images and a couple of teaser trailers but as I am with most films that I want to watch. I try to stay away from the storyline as much as I can so that I can enjoy the film as a film fan, and not as someone who speaks to filmmakers through various stages of production. So how did I do? More to the point how did the cast and crew of Rogue Warrior:Robot Fighter do? And what’s it all about?

Rogue Warrior:Robot Fighter drops us in the distant future and through a voice over and scenes at the start of the film  we learn that the inevitable has happened. Artificial Intelligence has run rampant and we see an ongoing battle between humanity and the AI not just on Earth but also on other worlds. We meet Sienna (played by Tracey Birdsall) who walks in a sun scorched landscape before encountering an AI robot fighter. The story then unfolds before our eyes and takes us on a super fun and action packed journey through what is hopefully the first episode in an ongoing franchise.

Of course with this being a science fiction film dealing with a battle between good and not so good, a lot of people will have to try and compare the film to something or other.Before having seen the film, people might think oh Star Wars or Star Trek but there is more of a wonderful Mad Max meets Resident Evil (although there are no zombies in Rogue Warrior).with Sienna being such a great character and played so well by Tracey that I actually thought to myself a couple of times ‘Move over Alice, Sienna’s in town (in a reference to the Resident Evil franchise)  Im still not a fan of recommending a film by saying ‘it’s like this film, or like that film’ but that’s the way it’s done nowadays

The high concept pitch is more often than not, the way to go and it works for Rogue Warrior:Robot Fighter. That’s not to brush aside the ton of originality that you’ll find in Neil Johnson’s film and whilst Tracey Birsdsall’s Sienna is a wonderful blend of Furiosa/Mad Max, meets Alice from the Resident Evil films and some Selene from the Underworld franchise, But even with those ingredients. Sienna is definitely Tracey’s role and she makes it her own being super watchable and likeable as she battles to survive against robots and the harsh landscapes she faces throughout the film (and the fact the scenes were shot on location, makes the landscapes seem even more hostile)

Neil Johnson’s direction is brilliant, and if you are inclined, then check out the estimated budget for the film on the IMDB page. Lets just say that for the money spent on this film, you couldn’t even film a single episode of Game Of Thrones. I often say that budget doesn’t matter to a film fan. A low budget doesn’t make a bad film, and a high budget doesn’t make a good film But with the low budget (and it is for a scifi film but its still a lot of money) Neil Johnson has made a film that looks like it should have cost ten times the money spent on it. The visual effects are not only fun but also very effective in the film but they always have been in the other films of Neil’s I’ve seen he certainly deserves the ‘highly visual filmmaker’ and knows what he is doing when it comes to making this type of film.

Rogue Warrior is a ton of fun to watch and with a set of great characters and a universe that just begs to be explored in future films, I for one hope that the film does what it needs to do in order for Neil and crew to venture into further installments of the series.  I love that Rogue Warrior:Robot Fighter got me a little nostalgic. As a child I used to love watching science fiction films that became cult classics such as Spacehunter:Adventures in the Forbidden Zone, Krull, Metalstorm, Battle Beyond The Stars to name a few. I can easily see myself rewatching Rogue Warrior over the years as it ends up in my cult collection. Science Fiction films are a treat for me and I love watching new takes on them as well as ones that homage others.   But for today. Rogue Warrior:Robot Fighter very much earns its place in my heart for being a wonderfully enjoyable fun trip through the stars.

Check out this second teaser trailer for Robot Warrior:Robot Fighter.