Lets learn a little more about the man himself.

An actor, who some might say is most known for his role in Martin Scorsese’s Hugo (2011) or perhaps the voice as ‘Young Freddie’ in the 1992 film Freddie as Fro 7.(when he was only 10 years old)

For myself. I will always remember Edmund for his role in the latest film by Dominic Burns. Allies where Edmund takes the role and owns the role of Private Yorkie Jones, one of a small group who parachute behind enemy lines during 1944, on a snatch and grab raid that could swing the balance of the war majorly.into the favour of the Allies.

More than just a film about World War 2, Allies is about the people who fight the wars, the relationships they build up and the teamwork that keeps them together, but also alive.

That relationship and brotherhood bond carried off the screen and on two seperate occassions (once in May, and once in November) I met the ‘gang’ and they look like they have known each other for years.

Learning his craft from having parents who shall we say come from a very creative background. (I dont want to shift the focus from Edmund, but lets just say I was stunned to learn who his parents were) . Edmund was often around theatrical rehearsals and surrounded by actors.At the age of 13, Edmund appeared in the Royal Shakespeares production of Lord Of The Flies and according to record. It was at this time that Edmund just knew he wanted to be an actor, and an actor he was.

Edmund then went to leading London drama school Rada and since then his acting career has seen him working in the Midlands at Birmingham Rep, the Bridge House Theatre in Warwick and Nottingham Playhouse as well as the Royal Shakespeare Company.

Edmund has appeared in Antony And Cleopatra, Julius Caesar and The Tempest as part of the Royal Shakespeare Companies Complete Works Festival , JB Priestley’s Dangerous Corner, and a huge list of other theatrical productions.

When I first met Edmund (and if he reads this I hope he takes it the way its meant) but you can just tell that he has a theatrical background. There is something very laid back, very quiet and very theatrical about the man. A real professional (thats not to say the other cast members arent)  One of the nicest guys you could ever meet and one of the most professional people you could ever meet. 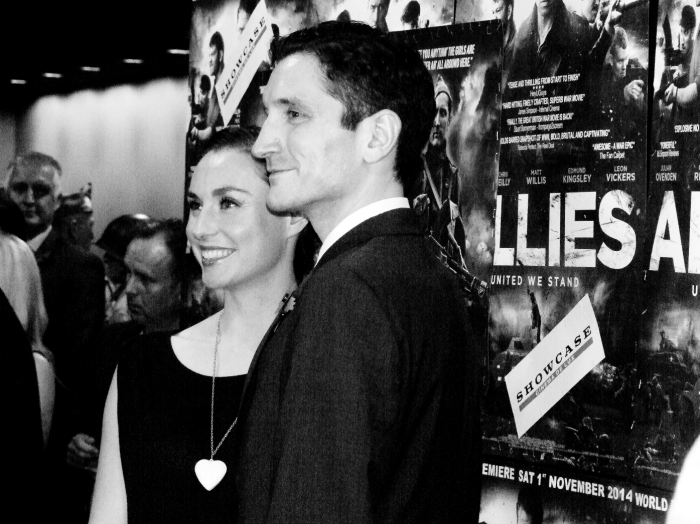 With over 20 credits to his name (and thats just on his IMDB page, which doesnt count theatrical), Edmund is a busy man indeed with the up and coming Artificial Horizon, Tomorrow, & Capsule (Edmund plays Guy an experienced British fighter pilot who is in command of Britain’s first manned mission to space all in various states of production and all due out soon.

I did manage to track down Edmunds showreel from 2013 and here you can see scenes from Hugo, Endeavour, The Borgias, Beast, and several other projects. Have a look for yourself. I look forward to seeing Allies alongside that very impressive CV very soon.

My best wishes to Edmund. Keep up the fantastic work.

Allies is out on DVD and Digital Download from Eone Entertainment.

The Soundtrack is available on the Itunes Store (by Philippe Jakko)