One of the ways my film viewing habits have changed over the years is my new found love for independent films. I still watch the juggernaut Hollywood blockbuster films but more often than not its the small films that I prefer to watch. Why? Well for a couple of reasons really. One reason is that I usually dont know much about the film beforehand, seeing as they rarely grace the covers of the major film magazines and on websites you have to search for articles on smaller films. The other reason is that I love discovering films and filmmakers that arent widely known and helping them out where I can by telling others that they should check out Film X and Filmmakers Y & Z. Doing my bit to help support filmmakers and the projects they put their hard work into. 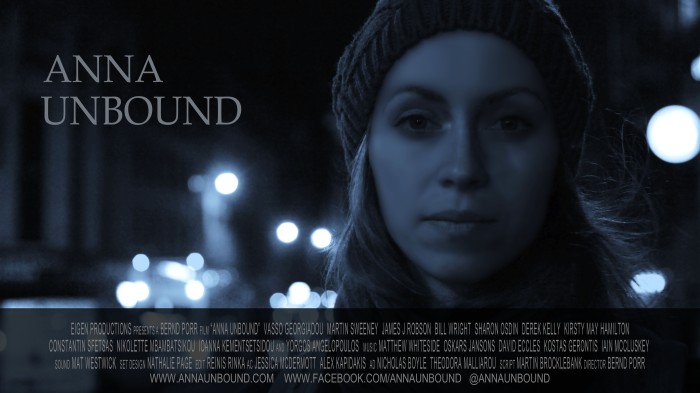 This morning I sat down and checked out Anna Unbound which you can find on Vimeo on Demand. as well as Amazon Prime Video.  Anna Unbound is a film I had heard of with regards to the title but knew nothing about the plot (just the way I like it) Sometimes though knowing 100% nothing about a film can be a risk if it happens to be a film type that you dont like. For example, im not a fan of musicals but thankfully Anna Unbound isnt a musical. What Anna Unbound is, is in fact a wonderful drama and very atmospheric creepy drama.  Anna  (played by Vasso Georgiadou) leaves Greece and moves in with her boyfriend in Glasgow,Scotland. Sounds like a great new start for Anna but not all is well.

Theres a scene super early on in the film when Anna goes for a job interview at a local company. Within seconds we ‘feel; that something certainly isnt right. The way people are acting, talking and just a very creepy general feel of uneasiness and uncertainty is brilliantly given off in the film. Anna gets the job and through the film we see her state of mind memories of past events (or are they), and an ever sense of building paranoia (but just because you are paranoid, it doesn’t mean its not true) grows around Anna.

The entire cast are great but the film does sit firmly on the shoulders of Vasso in the title role of Anna. Perfectly capable shoulders they are. Vasso is great as the troubled woman. Appearing in nearly every scene of this creepy film.  Many times in the film, I found myself wondering what was going on? But that’s the point. This is how Anna feels as she tries to piece together what the hells going on in her everyday life.

I dont normally bother about how much a film costs to make. For the viewer that doesnt really come into play A films budget is for the filmmakers but coming across how much this film cost to make ( £20,000 according to IMDB) shows how talented the crew of Anna Unbound are to make a film this attractive. Ive seen films that cost ten times that amount that dont even look a tenth as good as Anna Unbound. A very talented team are behind Anna Unbound it seems. Im very much looking forward to seeing what they put together next.

So, the short of it is. If you are a fan of psychological dramas and also love to see something fresh, and fun, but also dark and atmospheric. Then please do check out Anna Unbound. A great start to a new week for me.