As much as Id love to think that this release has been scheduled for a Birthday treat for me. Im sure there are many other reasons why The Curse of The Witching Tree is due to arrive on May 18th 2015. 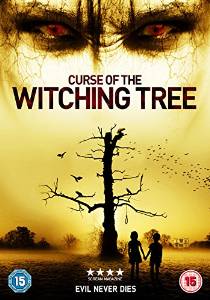 An innocent woman, accused of murdering her son and hanged as a witch, curses a tree and the children who play around it. The effects of this act of revenge echo through the years and centuries, and restless spirits haunt the house where the bodies of the cursed children have been buried. A family move into their new home, and begin to uncover the terrible truth behind The Witching Tree and the murdered children upon which they unknowingly sleep…

Written and Directed by James Crow,

You can learn more about the film by clicking here

Ive been a fan of the work of James Crow for a long time now. He has helped the creation of such films as He Who Dares and Allies, and has worked as Cinematographer, Editor, Casting and Producing. A man of many talents and Im very much looking forward to checking out his feature film debut The Curse Of The Witching Tree .

Ive also been a fan of the work done by Lucinda Rhodes-Flaherty from her acting work in such films as The Fall Of The Essex Boys, GBH (a.k.a. Riot) and her up and coming films No Reasons and Serial Kaller.

A great team behind what looks like a very decent film.

You can pre-order the film from Amazon by clicking here.