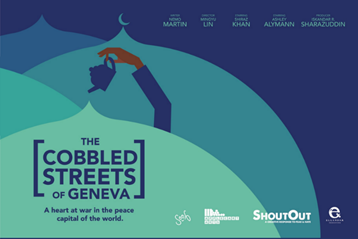 Adham is a silent and brooding middle-aged tragedy, standing outside a Mosque in North London. Waiting.

Two years later Adham’s boss invites him on holiday to “set him up” with a potential love interest.

Adham is panic-stricken and so in a bid to desperately bat away his admirer’s advances, he fabricates a husband.

But the plan backfires and suddenly Adham needs to produce evidence of his mythical beau. And that means he must convince someone to act the part…

Who best but his Imam and absolutely platonic friend Raushan?

The rest is what you’d expect: a call to adventure in the Alps, a meet-cute over antique books & Parisian coffee, a quarrel, and a sweet love with gardening gloves.

Award winning theatre company Ellandar Productions unites with long term collaborators 45North to champion Nemo Martin’s debut play [The Cobbled Streets of Geneva] – a warm queer romantic comedy about how role-playing new lives might bring us closer to who we really are.