The Rise of the Footsoldier series returns with its fourth installment . And this time the guys are going international in Rise of the Footsoldier 4: Marbella Fresh out of prison, Pat Tate (Craig Fairbrass) steps right back into his Essex nightclub business. But although the money is good, he can’t stop brooding about the man who had him put away. It’s not long before he’s off to Marbella to find Frank Harris and seek his revenge.  But Harris is long dead and the middle-man Terry Fisher (played by the films Director Andrew Loveday) offers Pat the biggest drug deal of his life.

Hammers, knives, crossbows and good old-fashioned fists are making their comeback in this British crime thriller featuring some of the most known names in British indie film and half of those names appear in my DVD collection several times. Whilst the ‘series’ of Footsoldier movies has changed style since the epic first installment directed by Julian Gilbey in 2007, to the far gritter and more character driven (and my favourite of the series) Rise Of The Footsoldier II written and directed (and starring) Ricci Harnett, the 3rd Footsoldier movie in 2017 changed the style to a far more popcorn, Friday night type movie which fans lapped up. Now its time to head to Marbella for the 4th installment

The first Rise of The Footsoldier is one of my favourite UK films and a film that I have seen countless times over the years, it had a wonderful epic feel to it and told a story that had been told before, but also added to the story of Carlton Leach (played by Ricci Harnett) but 3 films on from that 2007 film, the films in the Footsoldier film have a very different feel to them, Footsoldier 3 and Rise Of The Footsoldier:Marbella have more of a popcorn flashy feel to them, with pop music soundtracks, stunning bikini clad women, and super flashy editing. Now I dont mean any of that as a negative. The films are fun to watch and listen to, although it can sometimes be a struggle when the main character in the film is such a horrible human being who spends 90% of the films running time being…..well pretty damn horrible. But the film word is no stranger to have less than angelic characters in the main roles, it just makes it near impossible to have any sympathy for the main character (but chances are, we arent meant to like him, we are just meant to be along for the journey as he shouts, swears and mistreats whoever he wishes) Other than that, i cant fault the film. Andrew Loveday has done a wonderful job with this film, its gorgeous to look at, the soundtrack gets you racing, there are some great comedic moments i 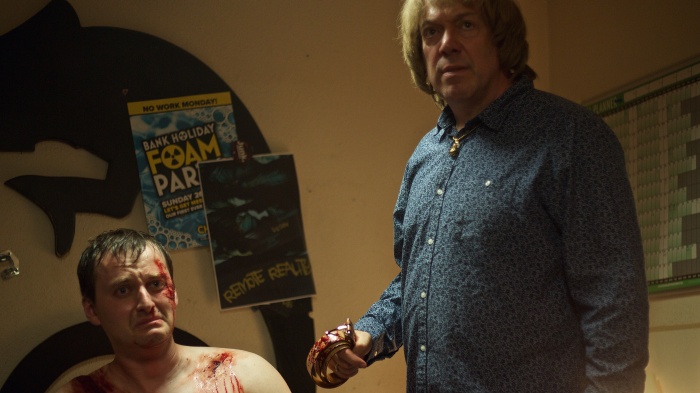 Other than that, i cant fault the film and dont need to fault the film. Andrew Loveday has done a wonderful job with the directing duties on the film his film, its gorgeous to look at, the soundtrack gets you racing and there are some great comedic moments in the film most of them go to Roland Manookian and Terry Stone who deserve a film of their own as they take the scenic route from Esses to Marbella, creating chaos along the way.I bet filming those scenes was a riot.

A welcome return to the series, is Emily Wyatt as Charlotte who is not just a token girl like many UK crime films feature, but she is a force to be reckoned with and whilst she might seem that she is under the spell of some of the ‘alpha males’ she is no victim, she owns the scenes she is in and its great to see her return to this world. If there is a fifth instalment of the series, bring back Charlotte. Nick Nevern (Brotherhood, and The White  Collar Hooligan Trilogy) joins the series and is a great addition. Ive been a fan of Nicks for years and its always fun to see him tackle different roles.

So for those who are a bit sniffy about ‘oh yet another Essex Boys movie’ do give this one a chance. Its not in any danger of winning Oscars next year, but it does what it wants to do and what it needs to do, entertain you, make you laugh, and forget about life outside your front door for just over an hour and twenty. Its a fine piece of entertainment. Now bring on the 5th installment girls and guys! Oh and stick around after the dancing credit sequence, theres a post credit scene that looks like it sets up the inevitable Rise Of The Footsoldier 5